Operation is effortless and can be either fully automatic or carried out manually via the tilt lever on the steering wheel, depending on the gearshift programme. The driver is not distracted and can fully concentrate on the road.

The shifting strategies of the MAN TipMatic® semi-automatic manual gearbox are designed to provide an optimum balance between comfort, efficiency and speed. The engine, clutch and gearbox are adjusted to each other in such a way that every shifting operation is completed as quickly as possible. SmartShifting is an evolution of the SpeedShifting function. While SpeedShifting allows for quicker shifting between the three highest gears (10th, 11th, and 12th), SmartShifting allows for a combination of fast shifting processes in all gears. This means, for example, a quicker downshift of the transmission on inclines, thus maintaining the momentum and saving the truck fuel.

Using the electronically controlled engine brake in the so-called upshift assistance (HSU) makes it possible to control fast jumps of up to three gears, especially on inclines. The intelligent software calculates the optimum gearshift speed using data such as the accelerator position, the vehicle mass and the calculated driving resistance. The optimum speed in this case is not necessarily the fastest. It is rather an ideal compromise between gearshift speed, comfort and material wear.

Idle Speed Driving allows for comfortable driving at idling speed. It enables the driver to manoeuvre the truck with exceptional precision or to just let the vehicle cruise along comfortably in slow-moving traffic on the motorway. After moving off, the vehicle travels at a low idling speed of around 600 rpm, without the driver having to press the accelerator. If the engine torque is insufficient at idling speed, the MAN TipMatic® shifts down. The clutch opens as soon as the driver presses down on the brake pedal.

Dynamic start-up - even with maximum load and on rough terrain.

Optimum gear selection is provided by the MAN TipMatic® load detection function. It automatically selects the optimum gear for moving off when the vehicle is empty or fully loaded. In addition, the high transmission ratio spread and the gradient recognition software function also support excellent moving-off behaviour.

The rocking-free function of the MAN TipMatic® facilitates moving off if the truck is stuck in snow or damp, muddy ground. It automatically selects the best gear to reduce the torque to the drive wheels, thereby avoiding wheel spins. This makes it easier for the driver to ‘rock’ the truck free.

GEARSHIFT PROGRAMMES TO SUIT EVERY SITUATION

The FLEET software version restricts manual interferences with the automated gearshift strategy, thereby ensuring optimal gear changes in every driving situation. Quick downshifting using the kickdown function is also inhibited, encouraging a driving style that reduces consumption and preserves the drivetrain. FLEET allows the driver to be more relaxed and concentrate fully on the road.

The PROFI software version allows for manual gearshifts to be carried out at any time, as for example quicker downshifting in kickdown. This allows experienced drivers with MAN ProfiDrive training to make the most of the vehicle's efficiency potential.

The OFFROAD gearshift programme is an optional extra designed for driving off-road and in difficult conditions (e.g. steep uphill climbs). Manual gearshifts are possible at any time.

The 'DP' (Drive Performance) driving mode enables a more agile driving style on the road and can be activated if higher acceleration rates are required for a short period. This performance-oriented gearshift version allows for quicker gear changes and later shifting, thereby improving acceleration.

The DM, RM gearshift version is intended for precise manoeuvring at slow speeds, partly by slipping the clutch. Gear selection is limited to the first two gears, with the mode designed for short term use only.

The COLLECT gearshift mode is intended specifically for use in refuse collectors (rear loaders and side loaders) that have longer stopping intervals and move off frequently. Start-up times are reduced by 25%, which optimizes the duration of daily collection trips.

The EMERGENCY software version cuts down gearshift times to improve acceleration. It has been optimised for use by emergency services, such as the fire brigade or disaster relief teams, when responding to emergency situations. 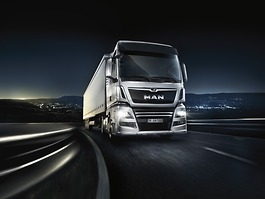 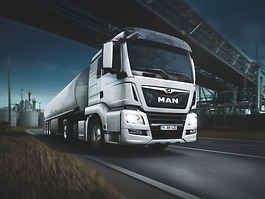 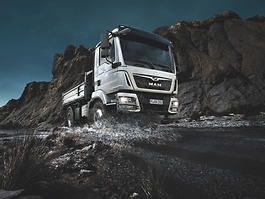 Find out more about the MAN TGM 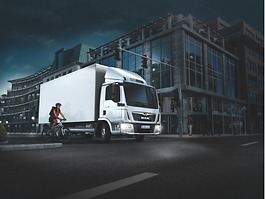 Find out more about the MAN TGL 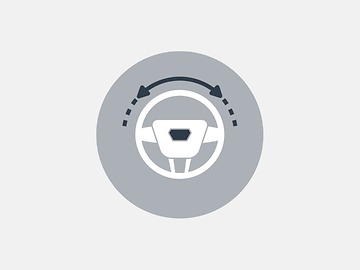 Easier steering thanks to additional steering torque: MAN ComfortSteering supports the driver by adjusting the steering forces to the vehicle speed. 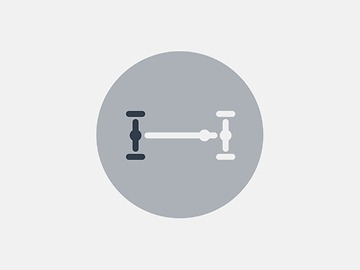 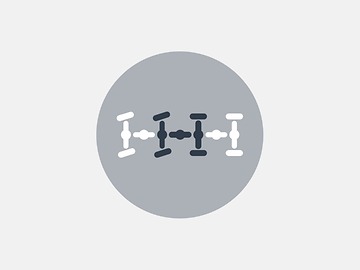 More traction for off-road applications and greater fuel efficiency on the road: The MAN HydroDrive® hydrostatic front-axle drive masters both.