MAN Lion’s City has a reduction in fuel consumption of 10.2%

Low floor city bus MAN Lion’s City is persuasive in comparative measurements
Really how economical is the MAN Lion’s City (Euro 6)? What do the technical developments provide to increase efficiency? We have done the test – in real use, with city bus drivers at the wheel. The comparison model: The MAN Lion’s City EEV year of construction 2012. The test was conducted under the supervision of TÜV Südbayern over an 8 kilometre long city course in Munich and a synthetic SORT 1 / 2 cycle (Standardized On Road Test, a standardized procedure in Europe for measuring the fuel consumption of city buses).

All test trips were undertaken with the air conditioning system switched on. In so doing, the Euro 6 vehicle drove on the SORT 1 / 2 cycle with an increase in consumption of 8 % compared with the MAN Lion’s City EEV. In mixed traffic on the Munich circuit, the result of technical innovations for reducing fuel consumption was even clearer: The Euro 6 vehicle consumed a good 11.4% less than its EEV predecessor. The saving in typical European inner city traffic was therefore a persuasive 10.2%.

Overview of the fuel-reducing measures of the MAN Lion’s City:

With exhaust-gas recirculation (EGR) in conjunction with cooling of the recirculated exhaust gas, a lower temperature is produced in the cylinder combustion chamber – therefore fewer nitrogen oxides are produced during combustion.

The MAN AdBlue® technology with selective catalytic reduction (SCR) reduces emissions of nitrogen oxides (NOx) by around 90 percent. AdBlue® is used here, a synthetically manufactured 32.5 % urea solution. The technology is combined with the CRT system as part of Euro 6 compliance in order to adhere to the stringent statutory emission values. Furthermore, the fuel consumption of a city bus is reduced by an average of approximately three to five percent as compared to the EEV standard.

The MAN CRTec® system is also used in the MAN Lion's City bus series to fulfil the high legal requirements for particulate values. The continuously regenerable, electronically controlled filter system removes up to 99 percent of the entire particulate matter. The system has been merged with SCR technology to satisfy the Euro6 exhaust-gas standard. The result: Fuel consumption for a city bus model is reduced by an average of approximately three to five percent as compared to the EEV standard (Enhanced Environmentally friendly Vehicles).

The standard diesel engines of the MAN Lion's City bus series are being driven in urban traffic with extremely low pollution. Even more environmentally friendly is the output of the natural gas engines (Euro 6 with CNG), offered as a six-cylinder engine with 200 kW (272 HP) and 228 kW (310 HP). Externally, the compressed natural gas models are very similar to the other city buses. On identifying feature, though, is the elegantly proportioned roof cover that conceals the gas tanks. 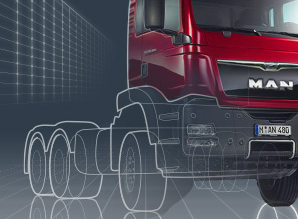